After several weeks of trying and failing to buy a bike on the Japanese bike auctions I've finally done it.
I got outbid several times and it's quite difficult when it's the middle of the night in Britain and the auction is underway in Japan.
On a near perfect example I bid on last week I was out bid by £2000!   I bid £3000 thinking that would be a good price and considering the 27% VAT and Duty to pay as well as shipping, but I got outbid and that was that.
So below is the bike I bought. 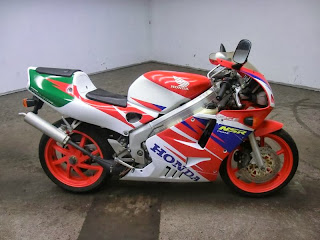 It was a bit of a gamble with this bike as there are only a few photos with it and my exporter chap said there was an issue with the meter.  That could be an electrical problem and it won't start. A blown fuse would be nice, or something more drastic who knows.  I'm going to guess that the key (weird credit card thing) is missing as it's not in the photos.  Which would be fine as I was intending on buying the HRC card to convert it to full power anyway. 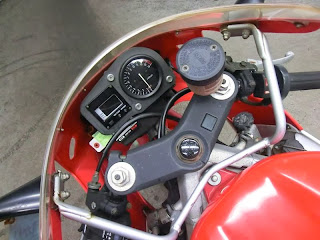 From looking at these pictures it's probably best to take the fairings off and check the pistons in the barrels.  Change the piston rings, oil, water and brake fluid.   Maybe have some parts if they're rusty, stripped and powder coated.
The windscreen looks like it's yellowed from the sun.  Maybe it can be polished out but a new windscreen could be in order. 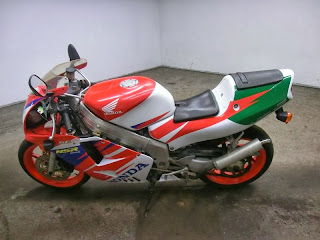 I think there are some chips in the stickers and I'm not sure how to tackle this.  There's a paint shop nearby specialising in fibreglass, carbon fibre and bike plastics so I'll take the bike to them to see what can be done to make it as beautiful as possible. 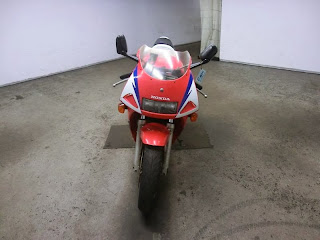 The rear picture below got me worried because to my eyes, the the rear wheel didn't look in line with the fairing. I thought maybe the rear subframe was bent or even the rear wheel, but it'll be inspected before shipping from Japan and if its more bent than a 9 bob note I'll reject the bike and just pay the penalty dictated by the auction. 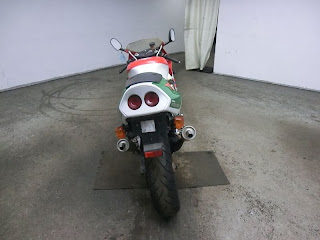 Below is the auction paperwork describing the condition of the bike.  I can't read Japanese so if anyone can understand it please email me. 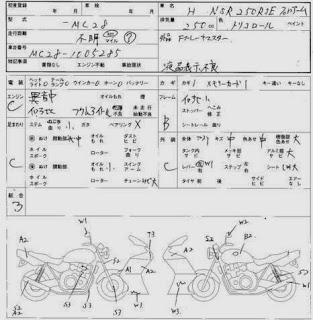 As the plan stands.
It goes in a crate, covered in futon pads.
Loaded onto a boat bound for Southampton UK and will take maybe a month at sea. Hopefully the ship doesn't sink or get stuck in a political problem in the Suez.
I pick the bike up in a van and pay 27% VAT and Duty to the Customs man in Southampton.
Get the bike through an MOT. Not sure how to get the digital speedo in Km/h to Mph but that's all part of the challenge.
An MOT allows me to buy road tax.
I have to have bike insurance to get road tax, which I guess it ok as I need to ride the bike after I de restrict it and sort out the jetting, although I'm intending on selling this bike on Ebay for a profit and not intending on riding it as my bike.

Thats the challenge, and I hope to restore a beautiful 1990s pocket rocket to it's former glory.

Importing 2 strokes from Japan to Britain

I've been asked a few times over the years about if I can get hold of a VJ23 and how rare they are in Europe.  Well, they're pretty rare in Japan too.
So I thought I'd import bikes direct from Japan in the Auctions.
There's an element of risk.   The bike could've been raced for years and the standard fairings put back on the bike when it comes to sell it.
I noticed a pristine faired NSR with only 4000km on the clock that had marks on the wheels from tyre changes and quite worn discs.  I'll steer well clear of this type bike.
The example below is a good honest bike though. It has 15000km on the clock and all the normal surface corrosion on aluminium.  It's just a matter of stripping the bike and scrubbing off the fluffy aluminium oxide with scotchbrite.  Maybe get some black painted parts powder coated.  Clean the carbs,  check for scoring in the barrels and change the piston rings.

Maybe I'll win the bidding on this bike.  Hopefully a VJ23 comes up soon so I can bid on one of those.
After winning the auction on a bike it needs to be shipped in a crate to Britain.  27% in VAT and Import duty needs to be paid (ouch!)  and I'll collect the bike in person from Southampton.
Hopefully I can get the bike stripped, serviced and rebuilt for Spring 2014.
The paperwork may slow things up.  The bike will need an MOT, and taxed in order to get a registration plate, which means I insure myself on this bike, even though I'll probably never ride it.

Anyway.  If I get a bike over here. I'll do a photo rebuild, with torque settings part numbers and show the process of the rebuild.

Ebay stole money from me

It's not a nice subject but here is something to bear in mind when selling on Ebay.
My Ebay shop got hacked, I don't know how Tony Chubb got hold of my password for Ebay but he did.

Several months ago I noticed in my listings there was a £2000 camera listed on my shop.  I thought it was very strange and assumed Ebay made a mistake so I ended the listing and thought little of it.   Getting through to anyone at Ebay is a nightmare.
So, about a month ago I had sales of a Silver Khanda coin I sell but instead of the payment going to info@titanclassics.com the person paid was tonychubb78@yahoo.co.uk

I reported it to Ebay and sent a cancellation email to the customer and the first customer accepted  it and got his money back straight away. The second customer refused the cancellation of the sale, even though I told him of the fraud.  He seemed to get angry. He got his refund a month later and was refunded by Ebay.

I spent hours on the phone to Ebay pointing out the fraud with screenshots etc.  They leave in a queue waiting 20 minutes, then when someone answers they talk sympathetically and transfer you  to someone who doesn't know any details. You tell them again and they transfer to someone else who also knows nothing.
I spent hours on the online chat to Ebay and got sympathy but nowhere.
Then I had a emails demanding the £42 or they'll close the lathe*dog ebay shop down.  The shop that pays them £200 a month in fees. They also threatened bailiffs to recover the money.  I asked to speak to a manager.  Didn't happen, although the lady said a manager would phone me.  They didnt!
I paid the £42!
The system of Ebay is, it is a ROBOT.  There is no human at the helm, just minions at the end of the line saying soothing words. Fraud and counterfeit goods are actively encouraged.
Tony Chubb is a debt collector in the North of England.  I reported him to Ebay, Paypal and even the Police. All of which never replied and didn't want to know.  I emailed Tony myself and didn't get a reply.
It could be that somebody hacked his paypal and will empty it when it fills up.

Ebay is a criminal enterprise.

I've always meant to get a de restricted airbox lid for the my VJ23.
On reading the excellent rgv250.co.uk forum it was mentioned the lid has two pipe nozzles.  You have to take the pipe from the bottom of the float bowls of the carburetor and connect them to the pipes indicated in the photo.  That way, at high speed the pressure from the ram air effect is equalised with the float bowl.
I'm not sure but I think in the past when driving very high speed, fuel was leaving the exhaust pipe unburnt.


You could probably put a couple of holes in the sides of the standard airbox lid and use some kind of pipe fitting to get the same result but a lot cheaper, but I'm glad I've got an original Suzuki de restricted lid. It just makes this modern classic that bit more complete.
Hopefully it'll give a bit more Ooomph over 110mph too.